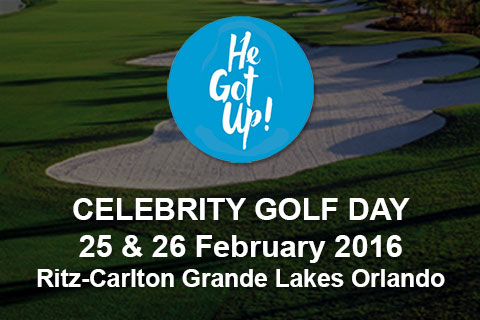 He Got Up Celebrity Golf Tournament

Renowned Entertainers, Perennial All-Stars Among Celebrities Golfers Can Be Paired With

ORLANDO (27-January-2016) – Award-winning actor Chris Tucker, Country music star Bryan White and Thomas McClary, founder of the legendary Motown group The Commodores, are among the noted entertainers who have been added to the list of celebrities participating in next month’s He Got Up Celebrity Golf Tournament benefiting the Orlando Serve Foundation.

The golf tournament will be held on Friday, February 26 at The Ritz-Carlton Golf Club, Orlando.  The tournament will be preceded by a dinner and celebrity auction on Thursday, February 25 where golfers can bid on the celebrity they want to be paired with during the tournament, as well as a silent auction and live auction. Salters will serve as the emcee for the pairings party which will include interviews with several of the participating celebrities.

Vacation packages provided by the American Fundraising Foundation to be auctioned off include:

Continental breakfast at the course will begin at 7 a.m., followed by a shotgun start at 8 a.m. Participants will be able to enter various competitions held in conjunction with the tournament for prizes, including hole-in-one, longest drive and closest to the pin contests.  Following the tournament, there will be an awards ceremony and recognition luncheon on the lawn at The Ritz-Carlton Golf Club.

All-inclusive golfer packages are available for $2,600 per foursome and include four tickets to the Pairings Dinner; continental breakfast for four in The Ritz-Carlton Club House; a celebrity paired with the group; a caddie; golf carts; on-course beverages and activities; awards luncheon in The Ritz-Carlton Golf Club; and a Player Gift Bag.

Larson Consulting Services, an independent SEC and MSRB registered financial advisory firm, has signed on as a $10,000 sponsor, as has the Orlando World Outreach Center. Other sponsorships are available.  All proceeds from the golf festivities will benefit the Orlando Serve Foundation, a 501(c)(3) tax-exempt charitable organization that is organizing He Got Up, a day of celebration and service for families, veterans and individuals in need or homeless in Orange, Osceola and Seminole counties.

The event will take place at the Citrus Bowl on Easter Sunday 2016 (March 27) and include an inspirational Easter celebration as well as a day-long Community Resources Fair. The fair will provide those in need with training, job-readiness and employment opportunities, medical and dental screenings, legal services, and connections to other agencies and organizations that can offer other resources and assistance for self-sustainability.

Tim Johnson, senior pastor at Orlando World Outreach Center and president of Orlando Serve Foundation, is the visionary behind He Got Up.

“Our goal with He Got Up is to address this incredible need in Central Florida by demonstrating our love for our neighbors in a dignified way by showing them we care through this day of celebration and service that addresses many of their spiritual and material needs in one location,” said Johnson, a Super Bowl Champion with the Washington Redskins, and member of 1986 NCAA football champion Penn State squad, who also is participating in the golf tournament.

For more information about the ‘He Got Up” Celebrity Golf Day activities, visit www.orlandoservefoundation.org.

NEW: Thomas McClary – Founder of legendary Motown group The Commodores. McClary spent 15 years as the lead guitarist while also participating in songwriting, producing, and lead-vocal duties. His guitar solo in the Commodores song “Easy” has been hailed as one of the best solo guitar performances of all time

NEW: Pam Oliver – NCAA Track All-American and Sports Broadcasting Great.  Pam Oliver is a pioneer sportscaster with more than 20 years covering athletics nationally.  A graduate of Florida A&M University where she became a college All-American in both the 400-meter and the mile relay, Oliver has worked for ESPN, Fox Sports and TNT covering the NFL and NBA.

NEW: Lisa Salters – Sports Broadcasting Great.  Lisa Salters currently serves as sideline reporter for Monday Night Football and the lead sideline reporter for ESPN’s coverage of the NBA on ABC. Salters is also one of the featured correspondents on ESPN’s newsmagazine show, E:60. At ESPN, Salters’ reports also have been regularly featured on the award-winning “Outside the Lines” series.

NEW: Chris Tucker – Renowned Hollywood Actor.  Made cinematic debut in House Party 3, and gained greater film recognition alongside rapper Ice Cube in the 1995 film Friday. In 1997, he co-starred with Charlie Sheen in Money Talks, and alongside Bruce Willis in The Fifth Element. Along with Jackie Chan, Tucker later starred in the 1998 martial arts action comedy Rush Hour and its sequels, Rush Hour 2 and Rush Hour 3, in which he played Detective James Carter, an LAPD detective.

NEW: Bryan White – Renowned American country music artist. White has released six studio albums and a greatest hits package, all on Asylum Records. His first two studio albums — his 1994 self-titled debut and 1996’s Between Now and Forever — were both certified platinum for shipping one million copies in the U.S., while 1997’s The Right Place was certified gold. His releases for Asylum have accounted for 15 singles on the Billboard country singles charts, with six reaching Number One including “Someone Else’s Star” (1995) and “Rebecca Lynn” (1996)

Orlando Serve Foundation is a 501(c)(3) tax-exempt charitable organization that exists to affirm and ignite partnerships to restore and strengthen individuals and families in need. Orlando Serve is committed to the vision of He Got Up.

About American Fundraising Foundation:
Wade and Barbara West worked as television news anchors and reporters for more than 30 years.  Despite winning Emmys and Edward R. Murrow awards, they grew tired of focusing only on crime, crisis and catastrophe: so they left their successful TV careers to form the American Fundraising Foundation. Now, rather than reporting on problems, they raise millions of dollars every year to help deserving charities solve problems one community at a time.